We discuss how process systems engineering studies can facilitate the development of a diverse set of novel strategies for the production of fuels and chemicals. First, we discuss a general optimization-based framework for process synthesis where surrogate unit models are generated using experimental data or offline simulations and employed for the modeling and optimization of integrated energy systems. Second, we discuss the application of the proposed framework to a number of new energy strategies, including biomass-to-fuels and solar fuel strategies, as well as methane upgrading strategies. 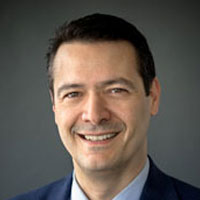 His research interests lie in the general area of process and energy systems engineering and optimization. Specifically, he is studying production planning and scheduling, supply chain optimization, and chemical and energy systems synthesis and analysis with emphasis on renewable energy technologies. He is the recipient of a National Science Foundation CAREER award, the 2008 David Smith and the 2013 Outstanding Young Researcher awards from the American Institute of Chemical Engineers, and the 2016 Production and Operations Management Society Applied Research Challenge Award.