It is already evident that Artificial Intelligence (AI) has already changed the way we live across many applications including face recognition and driverless cars. But perhaps the most important contribution of AI is allowing us to innovate in ways not possible before with other computational tools. I will give examples of such promising innovations in biotechnology, including learned representations of molecules, analyzing interactions between proteins and molecules and inferring cellular behavior. The talk concludes with some thoughts on how to forge ahead as computational scientists in the age of AI. 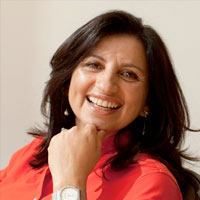 Soha Hassoun is Professor and Past Chair of the Department of Computer Science at Tufts University. She holds secondary appointments in the Department of Chemical and Biological Engineering and also in the Department of Electrical and Computer Engineering at Tufts. Soha received the BSEE degree from South Dakota State University, Brookings, SD, the Master's degree from the Massachusetts Institute of Technology, Cambridge, MA, and the Ph.D. degree from the Department of Computer Science and Engineering, University of Washington, Seattle, WA. Soha's research interest is in the area of Bio Design Automation, where her lab aims to build tools for analyzing and designing complex biological systems. Her lab is now focused on using Machine Learning to develop such tools. Soha was an integrated circuit designer with the Microprocessor Design Group, Digital Equipment Corporation, Hudson, MA, 1988-1991, and worked as a consultant to several EDA companies including Mentor Graphics and Carbon Design Automation. Her research interests in this area include developing algorithmic solutions to facilitate designing integrated circuits and understanding the impact of new technologies such as double-gate devices, carbon nanotubes, and 3-D integration on design. Soha was a recipient of the NSF CAREER Award, and several awards including the 2000 and 2007 SIGDA Distinguished Service Award, and the 2002 SIGDA Technical Leadership Award. She held executive and technical leadership positions for several conferences and workshops. She co-founded the International Workshop on Bio-Design Automation In 2013. She served on the IEEE Council on Design Automation and was Director of Educational Activities for ACM SIGDA Special Interest Group on Design Automation for several years. She is a fellow of Tau Beta Pi and a senior member of IEEE and ACM. Soha is an educator. She is committed to providing opportunities for students to learn, to practice their profession, and to be authentic to themselves, regardless of societal or self-imposed roadblocks.