Inferring the underlying lithology from seismic data is an important step for exploration and reservoir characterization. This can be formulated as a computer vision problem, where deep learning using convolutional neural networks (CNN) has had widespread success. In this presentation I will show how a deep CNN model can be trained to predict lithofacies from input seismic data.

A network adapted from the VGG-16 architecture was used as the starting model. The final layer was modified to include dense layers with seven output nodes representing the seven possible facies. Numerous tests have been run to determine the optimum architecture, including different regularization options (e.g. weight decay, dropout), and data augmentation. At the time of writing, the best validation accuracy achieved is around 85% which enables channels to be clearly identified in the prediction maps. Tests indicate that a network with fewer convolutional layers produce similar results, although the additional parameters may be required to enable the model to generalize to a wider variety of datasets.

Using deep CNNs for lithofacies classification from seismic data have shown promising results. The proposed methodology can aid interpreters to extract vital information from seismic data, improve reservoir characterization and reduce cycle time. The next stage is to assess the impact of noise (random and coherent) on the classification performance. Additional features derived from seismic data (such as impedance and attributes) could also be included as extra information to help the network distinguish between classes with considerable overlap (such as channels and levees). The use of generative adversarial networks (GAN) may also help to overcome the issue of limited training data. 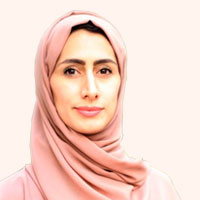 Salma Alsinan received a Bachelor of Science degree in geophysics from University College London in 2011 and a Masters degree in geophysics from Stanford University in 2015. During her studies, she had the good fortune to work on a wide variety of topics in statistical rock physics and quantitative seismic interpretation. She began her industrial career in 2011 at the Advanced Research Center at Saudi Aramco, Dhahran. Alsinan was a part of the Reservoir Geophysics and the Intelligent Geophysical Data mining teams where she has been working as a Geophysicist/Data scientist in the field of data interpretation. Currently she is working on developing machine-learning algorithms to integrate different data types for assessment of source rock maturity in the kingdom. Furthermore, Alsinan is leading the advanced facies classification project, which focuses on using different networks along with transfer learning techniques to automate classification. Alsinan is interested in in understanding the fundamental relations between geophysical data and reservoir properties, to quantify uncertainty in the developed models, and to address value of information for decision making under uncertainty.